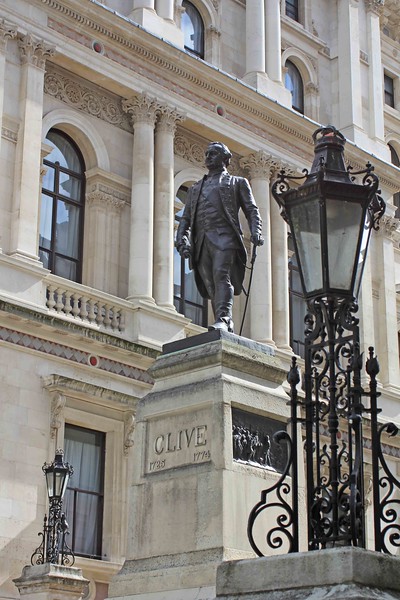 From Wikipedia: "Robert Clive, 1st Baron Clive, (29 September 1725 – 22 November 1774), also known as Clive of India, Commander-in-Chief of British India, was a British officer and adventurer who established the military and political supremacy of the East India Company in Bengal. He is credited with securing a large swath of South Asia (Bangladesh, India, Pakistan) and the wealth that followed, for the British East India Company. In the process he also turned himself into a multi-millionaire. Together with Warren Hastings he was one of the key early figures setting in motion what would later become British India. Blocking impending French mastery of India, and eventual British expulsion from the continent, Clive improvised a military expedition that ultimately enabled the East India Company to adopt the French strategy of indirect rule via puppet government. Hired by the company to return a second time to India, Clive conspired to secure the Company's trade interests by overthrowing the locally unpopular heir to the throne of "Bengal," the richest state in India, richer than Britain, at the time. Back in England, he sat as a Tory Member of Parliament in London.

Clive was one of the most controversial figures in all British military history. His achievements included establishing control over much of India, and laying the foundation of the entire British Raj (though he worked only as an agent of the East India Company, not the British government). For his methods and his self aggrandisement he was vilified by his contemporaries in England, and put on trial before Parliament. Of special concern was that he amassed a personal fortune in India. Modern historians have criticised him for atrocities, for high taxes, and for the forced cultivation of crops which exacerbated famines."